A Beautiful village afternoon in Lakhipathar: Raining Rainbows and the blue heart.

Surrounded by green forest cover and paddy fields, lies Lakhipathar Village about 15 km from Digboi in the Tinsukia district of Assam– where Asia’s first Oil Refinery was established. This short story is from my stay at my grandmother’s place.

Doing a bit of paddy work, I was returning home, when the most beautiful thing happened. I took the responsibility of bringing back the three cunning cows. Holding on to the tight rope, I pulled them so that they don’t run away. Their pull was hard enough for me to slip and slide along the mud. Perks of village life, I suppose! While the two rushed, the other slowed merrily grazing grasses by the little stream. We were in the middle of the huge stretch of paddy cultivation that connects the villages on either side.

The more I tried to rush, the slower she walked. Perhaps, it was because the energy around me wanted me to halt for a bit and enjoy the beauty around me. As I turned back, I could see the rain pouring heavily, the clouds and the trees becoming one with the horizon forming a white veil of rain. A thick layer of overcast clouds covered the sky. Between them was a heart-shaped blue sky and a white cloud, precious and fascinating right? The sun and the rain unified to create the effect. The lakhipathar weather is soothing.

Far away and high above, were two beams of sun rays piercing through the cloud. Adding to it, the green fields, the streams on both sides of the road, it was the icing on the cake. The rain touched us only for a minute. At this point, the voice in my head knew a rainbow was imminent. As soon as I turned forward, the luminous rainbow appeared on either side with its arc into the clouds, gradually transforming from lighter to darker shades of VIBGYOR.

The Rainbow and the Blue hearted Sky

The rainbow grew larger, each colour being visible to my naked eyes. Now, imagine the egrets flying against the background of the rainbow, its flight above the green dancing crops and tiny droplets of rain on your body. Soothing right? In awe of its beauty, I rested in a squatting position with hands-on my cheek and a smile from the soul, watching the rainbow the birds and all other elements which created the moment.

The moment was as such, that the time had slowed down, and I could literally see everything in slow-motion – the flight of feathers of the egrets (bogoli), the jump of a couple of black-white birds landing on the field boundaries (Poka dhanor maje maje horu horu ali o horu horu ali….🎹🎼) and more. The clouds cleared and the sun brightened. Meanwhile, the cows advanced far away toward home. After twenty minutes of pure happiness, I joined them too.

Conclusion: Beauty, contentment and happiness are everywhere, what one requires is a definitive perspective to connect and embrace them. I seek happiness everywhere.

Though Lakhipathar in Tinsukia is a remote village, the essence of peaceful village life can be found here. However, the area is in need of development. May it be transport, road connection, schools, market area – there are only a few. The nearest town is Digboi which is about 15 km from the village.

2020-09-05
Previous Post: Scribbling, if I may say so….
Next Post: A Sudden Unplanned Trip to Kodaikanal, the first of many that followed. 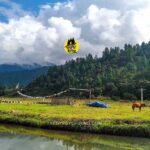 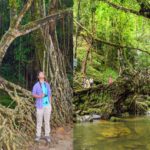